From March 19 to March 25, 2017, during the fourth series of peer observations organized within the FAB (Formative Assessment Benchmarking for Foreign Languages Learning & Teaching in Higher Educations) project, University of Pecs, Hungary, hosted a visit of foreign language teachers from Finland, Hungary and Poland. We observed 13 foreign language classes, including lessons of Hungarian (A1 and A2 CEFR level), Russian (A2 CEFR level), Italian (B1 CEFR level), French (B1 and B2 CEFR level), German (B2 CEFR level) and English (C1 CEFR level). Some classes were held at the Faculty of Modern Languages and were therefore directed to future philologists. The other courses were offered to students from different faculties.

On Friday, 24 March, in the morning hours, instead of class observations, a meeting of the foreign observers with the authorities and the teachers of The Foreign Language Examination Centre at the University of Pecs was held. At the meeting, Robert Marcz, leader of the Hungarian FAB team, informed the guests of the Hungarian foreign language teaching system at secondary and tertiary level. Moreover, the observes were given an opportunity to familiarise themselves with foreign language course books which are published by the University of Pecs. The meeting was also a forum for information and experience exchange about similarities and differences between the educational system in each partner’s country.  The guests asked questions about the most popular foreign languages and foreign language teaching policy at the University of Pecs, as well as the challenges of the labour market for the university graduates.

The lessons lasting 90 minutes are held in the morning, in the afternoon and evenings. The number of students in each group differs as well. It ranges from 2 to more than 20. Some classrooms are equipped with multimedia projectors, TV sets, computers, but there are also classrooms with nothing but a blackboard. Most teachers are involved in the teaching process. They are willing to offer assistance to students and they establish a friendly rapport with them. Most classes are held in a teacher-centred manner, which prevents students from influencing the course of the lessons. It is noticeable that not all the students are used to working in pairs. The classes are conducted in a target language, the teachers rarely resort to Hungarian or English as languages of instruction. The range of topics covered in the lessons ranges from daily routines through traditions of the Italian cuisine to maritime transport including texts on bulk carriers and container ships. Homework assignments are not common practice.

Formative assessment in the observed classes

It should be noted that the teachers from the University of Pecs do not apply the formative assessment tools equally. Some of them are used to applying traditional assessment tools and such a role division, in which the student cannot significantly influence the lesson course. It mostly refers to elderly lecturers. There are however teachers, especially those of English and Hungarian who use selected formative assessment techniques.

Peer- assessment: During an English language lesson at C1 CEFR Level, a group assesses part of classes conducted by one of the students, which involved presenting a piece of a movie, along with triggering and conducting a discussion based on it. The performance is assessed by means of five criteria including a range of vocabulary, topic selection, fluency of utterances, communicative effectiveness, grammatical accuracy. For each criterion, the student could be awarded five points, which were then put into an evaluation form, distributed and collected by the teacher. The student’s performance was presented during the next classes.

Creating student-friendly atmosphere: One of the teachers started his/her 8 a.m. classes by serving students a cup of tea. It was a lead-in to the topic of social roles in the area of social psychology.

Flexible adjustment of the lesson to new external factors. During a Lesson of Hungarian (A2-B1 CEFR level) students were asked to conduct a mini-interview with one of the observing teachers in order to gather as much information as possible about him/her. Students liked the task a lot due to its authenticity and the involvement of all those present in the class.

The stay in Pecs proceeded in a friendly atmosphere. The visit was a forum for an authentic exchange of experiences between teachers from Poland, Finland, Lithuania and Hungary. The observed classes give an incentive to reflect upon one’s own didactic methods and techniques. 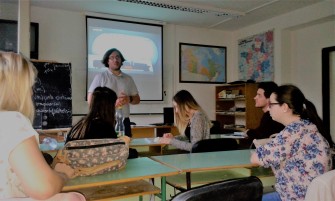 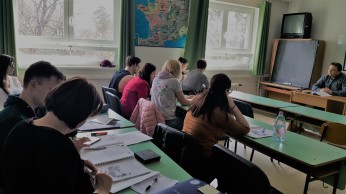 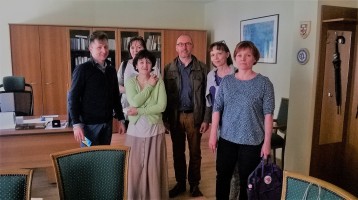